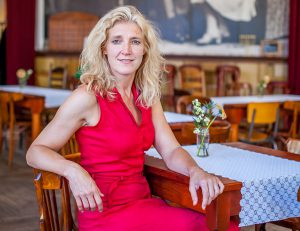 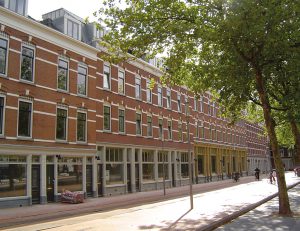 I have known dear Linda for 8 years now. I see her as my role model; a succesful cultural entrepreneur with a warm heart for people. I met Linda when she was searching for a Chinese person in the cultural field, to work with during the Operadagen (Music and theatre festival) in 2008. She was asked to produce a theatre show in Katendrecht where Chinese culture will be part of. Her only remembrance about Chinese culture back then, was her encounter with a Chinese girl in China, in a small village where she was taken to a cave where the Chinese girl started to sing for her. This remembrance was the inspiration for the concept of «Chinese Girl». We made a theater show where visitors were taken to 3 locations representing 3 different time periods: The past, The future and The Present of the Chinese community in Holland. The story ended in Walhalla Theatre Katendrecht with a Sichuan Opera show: Face Changing. Actually since then, Linda and I have been working on many projects reflecting the Chinese community in Holland.

Linda is not only interested in Chinese culture, she is the person to talk to if you are looking for making connections with multi-cultural Rotterdam. One of her biggest fans is Rotterdam mayor Aboutaleb. Linda has built a great reputation, starting from 1993, when she graduated from university in event management. Her first job was in an organisation covering all events in Rotterdam: Rotterdam Festivals. After working at Rotterdam Festivals for 7 years, she has set up her own organisation. Her experiences at Rotterdam Festivals made her realize which direction she wanted to give to her own business: the liveability of a big city. Linda: «A city like Rotterdam has so many cultures, but most people don’t mingle, they don’t meet and stay in their own peer group. I think this is a pity, because it is an enrichment to get to know your neighbour, and listening to eachother’s stories creates understanding.» 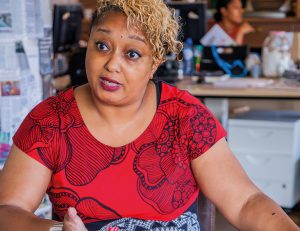 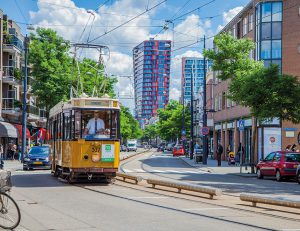 All nationalities can be found at West-Kruiskade in Rotterdam (so it’s said). This is probably the most international street of Holland. We Chinese people, as well as most inhabitants call it ChinaTown. But, visually, ChinaTown is still overlooked easily. Too bad if you ask me. I love being in ChinaTown, it’s my working area for many projects. I know lots of people working here or just passing by. One of the persons I adore is Alice Fortes. I met her when I was starting my Chinese artists collective Studio Zi. Alice arranged an empty shop-space for us so we could do all creative things we wanted. In exchange we were bringing art as well as a cultural atmosphere to the street. After 5 years now, Alice is still helping me. She still works at Alliantie West-Kruiskade (part of local government). I can see her walking as if she is always in a hurry. She talks so fast, so sometimes I really need to recapitulate. She is full of fire, which must be thanks to her Cape Verdean blood.

Alice was born in Rotterdam, as the youngest of the Family and the only one born in Holland (her other sisters and brother were born in Cape Verde). The family calls her «the Dutch one». Even though she was born in Rotterdam, she really feels connected to Cape Verde. Alice: «It is very important to know where you come from. I am teaching my son everything I know about our roots. I have pushed him to learn the Cape Verdean language and learn to respect the traditions, and have taken him to the islands. I find this essential to his upbringing and I am very proud that I have managed to do all that for him. He is very grateful already». 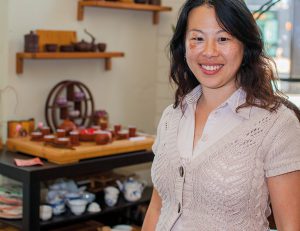 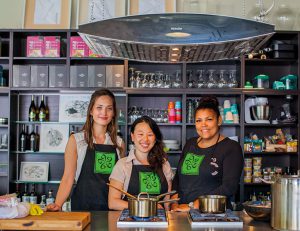 Dear Jinai is a friend of mine. She has joined Studio Zi (the Chinese artists collective I founded) in 2011 and we have been friends since then. She is like a small buzzing bee, never stops doing things and is always running from here to there. I don’t understand how she gets the energy; feeling a bit jealous.

Jinai studied architecture design, has worked as a photographer for several years and finally put her passion to the front: she opened Het zesde geluk in 2013. In this cooking studio you can buy cookbooks and supplies, follow cooking workshops and learn everything about high quality Chinese tea (Kung Fu Cha). Sometimes people book her for cultural events, and if they ask for it, Jinai will then appear in a Chinese Classical princess robe and perform a Chinese tea ceremony. So many people have already taken pictures of her! It’s fun. Like Jinai; she is always happy, laughing and smiling – She will have those manga eyes when she smiles, love that.

Jinai was born in Singapore and arrived in Holland when she was a small young girl. Her parents have always had businesses in West Kruiskade (ChinaTown Rotterdam), so she has practically grown up in this street. She has become kind of famous by what she does: she has appeared on national television many times and has written a cookbook on the food diversity at West Kruiskade (called Spicy, including recipes). She is joining many food events and also several cultural  – As I said, a busy bee. Once a week, she even teaches Chinese to higher education classes in Rotterdam. And since that isn’t enough to her, she will start up Jiao&Zi in the beginning of 2017. 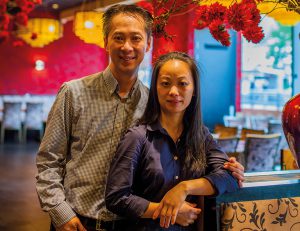 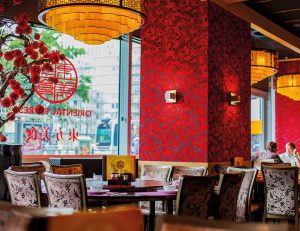 I remember when China Town Fastfood was launched. I was so surprised to learn that ChinaTown Rotterdam now got a Chinese fastfood restaurant. At the beginning I didn’t dare to go there. None of my friends went there so I got no reference whether the food was good or not. It must have been months or maybe a year before I really went to visit this restaurant. I went there after the bubble tea had caught my eyes. In 2009-2010, bubble tea was still unknown in Holland. Nowhere else you could have got this. My favorite one still is the red bean/grass jelly. I think after my first time eating in China Town Fastfood, I have never stopped going there; the food is always good. No single time I was disappointed by the quality or by the price. I am one of those people who need to share with others when they like something. So many times I have changed my appointments into lunch appointments,  to have a reason to eat at China Town Fastfood. I have got to know the people working there, especially one lady I recognize every time. This lady is Yin and she is the owner of this restaurant. Sometime I think: «Wow, how can a woman that small and skinny work so hard? Where does she get the energy?» Well, only after interviewing her husband Kawing, I have learned that Yin is a real workaholic – in a positive way. China Town Fastfood is her «baby» so she puts 200% into it to make it a success. She is a kind of control freak and a perfectionist, always trying to improve things where they can be improved. Kawing mentioned that Yin sometimes even changes the ingredients a bit if she thinks it will improve the flavor of the dish. Most of the time she is right. Sometimes Yin travels to Hong Kong to learn about new dishes and how to cook them, and then passes them to her chefs. She has even learned how to make some of the Dimsums. She has been the first person in Rotterdam who started selling bubble tea. 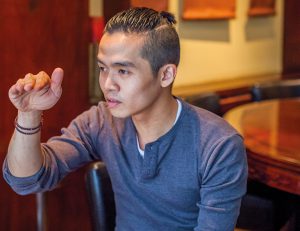 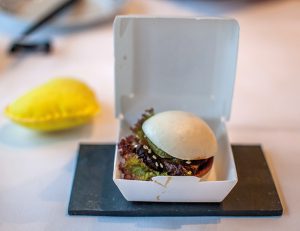 Kevin was born in Hong Kong. He came to Holland when he was 5 years old. At the age of 9 he was sent to Malaysia (His mom was Chinese Malaysian) to live with his grandparents, which enabled him to learn Mandarin as well as the Hokkien dialect. When he was 12, Kevin came back to Holland to start highschool. I asked Kevin if he also had to help in the restaurant of his parents – like many of us did. To my surprise he never had to. His parents had never asked him, and back then, he had no interest himself in food or preparing food. Kevin was studying architecture, but before finishing it he has started working in restaurants. He has worked in the kitchen of a French restaurant for several years. Not earlier than 2010 Kevin has started working in his parent’s restaurant Asian Glories, side by side with his father and uncle, who taught him everything about the Chinese kitchen. But these great times ended sadly when his father and mother died in the airplane disaster of MH17 in 2014. Rotterdam was shocked, because Kevin’s parents had a great name in the Rotterdam’s restaurant scene. Not only because Asian Glories (considered the best Chinese restaurant in Holland, where chefs would come to eat) was famous throughout the country, but also because of the huge clients list they had built up, with many guests thinking of them as friends. Kevin’s parents had been hard working people, had built up the restaurant from nothing to this great name. His mom Jenny had also been known as the most friendly hostess around, and it was commonly known that his father Popo made all Dimsum from scratch – nothing was bought readymade. 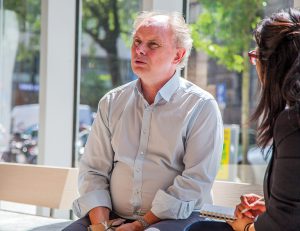 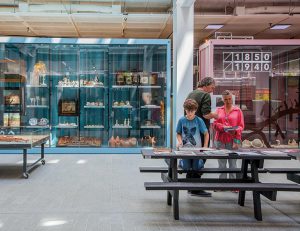 The Museum Rotterdam is for and about people. It is a museum offering experiences; so not really the kind place where you watch the exhibited art works from a distance. The Museum Rotterdam shows the real stories of people living and working in Rotterdam, as well as the history of the city. It also offers a stage for young people to work on exhibitions. A few years ago, a Chinese organization who has always performed the dragon dance during Chinese New Year festivals, has offered their old dragon to the museum. This dragon has been used for over 20 years and is now retiring in the museum.

I have known the Museum Rotterdam for many years already and I have worked with them since they were at their previous location. So I also know Jacques for some years now. Sometimes when I look at him I am thinking of those traditional old Chinese scholars (well, without the blue eyes) – especially from a distance. Jacques has already worked for the museum for over ten years. So he is the right person to speak to if you want to know more about the history of Rotterdam. Jacques: «Rotterdam was the first city of Holland that had been created «by design». The ground was too soft to build on, so they had created a way how to ram the ground firm and vast enough for building on it. This had happened in seventeenth century. In recent years it had also become the city with the first shopping mall in Holland. Since 1985, Rotterdam has developed a real skyline. It seems like Rotterdam has always been a pioneer in building. After the bombings during WOII, Rotterdam has started to grow to what it is now.